Reward Manager Smart Contract (REMASC) is a pre-compiled smart-contract that is executed on every block and has the responsibility to fairly distribute rewards collected from transaction fees into several participants of the network. However the distribution of rewards of a block is only performed once the block reaches a certain maturity. In other words, the rewards are paid only after a fixed number of blocks have confirmed a block. With the exception of the first blocks in the blockchain after genesis, every time a block is added to the blockchain, another previous block reaches maturity and its rewards are paid.

REMASC is an implementation of DECOR+ [1]

From this Reward Balance, the 10% (127500 in the example) will be subtracted to pay the miners having mined at the corresponding height. This creates a synthetic reward, that is equivalent to applying a low-pass filter to the received fees, and so this method has also been called fee smoothing. The 10% amount extracted from the Reward Balance, is called the Full Block Reward and will be referred to as F from now on.

The amount of fees in F will be affected by the following variables:

Some additional definitions will be introduced before we formalize how the payment is calculated for each miner.

One and only one block is mined at a height N. This block is the main block at height N. Blocks that share a parent with a main block are called siblings. These blocks can be added to the blockchain by publishers, which are always miners mining following blocks.

The payment for the miners of the main block, the siblings and the publishers will occur on the block N + 4000. The payment occurs as specified by the following rules:

It’s important to notice that these are integer divisions where results are rounded down. That’s why:

Finally, with all the previous variables computed, the payments will be performed as follows:

The miner of the main block receives

Also, for each sibling, a new amount needs to be calculated. This is, for each late block that the sibling published, it receives a punishment of ~5% of the .

The sibling is added on the block N+D for some positive value of D. A punishment for late publication is calculated for each as

Then the respective miners are paid

The remaining amount of is added to a balance called Burned Balance. As of this writing, burned money is lost but changes may apply. The Burned Balance is given by rounding errors or punishments. 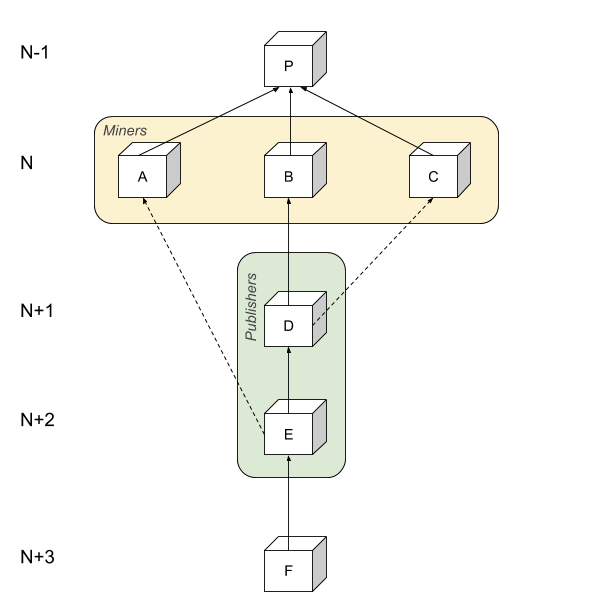 This way, we compute:

For this example, an assumption that there wasn’t a broken rule for any block was made. Otherwise, fees paid should have been calculated using .